The Dangers of Grease Traps

The Dangers of Grease Traps

If you’re a restaurant owner, you have heard of grease traps and the dangers of grease traps. If you haven’t, grease traps are devices necessary for catching major food particles and grease from a commercial kitchen before they enter the wastewater septic system.

If you consult any “Do Not Flush” list, you will see grease at the top of the list.

Many times, we don’t think about regular maintenance until there is a problem that needs to be fixed. Letting a grease trap go too long without cleaning can be dangerous and catastrophic. For your employees, customers, and restaurant alike. 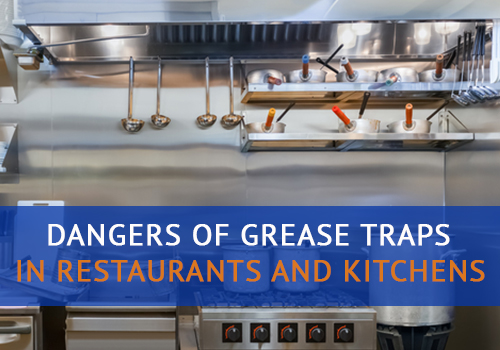 Ranging from improper installation to poor maintenance, an unhealthy grease trap leads to dangers both to your health and your wallet.

Improper Install of a Grease Trap

Always leave the installation of your grease trap to a trusted, responsible professional. If you realize that your grease trap isn’t accumulating much grease, there’s probably something wrong with it. It could be a leak. Or, there could be an issue with the output pipe that leads to the sewer.

In fact, one restaurant’s malfunctioning grease trap could be putting over 800 – 17,000 lbs/year into the sewer system.

A lot of cities are cracking down on malfunctioning grease traps. This can mean $1,000 fines.

The City Council of Clermont has released their Manual of Oil and Grease Prevention. The idea is that this manual will help minimize the introduction of grease and oil into the city’s wastewater system.

Get it right from the start with proper installation.

Clogs in the Septic System from Grease

If you allow your grease trap to go too long without proper cleaning, then it can eventually clog and back up your system. This leads to a build-up of waste and can cause an overflow to happen in your kitchen.

Grease on the kitchen floor is difficult to clean up (not to mention that putrid smell). It takes more than just water and soap. If grease leaks onto the floor, people are likely to slip and fall. If there’s spillage on the stove top or areas surrounding the stove, it could lead to our next topic, grease fires.

A kitchen grease fire is hazardous because you cannot put it out like other fires. Water does not mix with grease fires, instead making the fire spread. Instead, using a fires extinguisher or flour/baking soda are safer options.

It only takes a few ounces of grease to cause a significant kitchen fire.

Avoid the dangers of grease traps, like kitchen fires, by cleaning and draining the trap before it overflows.

Bad odors are a side-effect of not properly maintaining the health of your grease trap. Believe it or not, this can cause your entire kitchen to smell.

This not only affects how the kitchen staff performs but can also create issues with food prep. Foods can take on odors, causing them to taste bad or funky.

If you don’t take care of these odors immediately, they could seep into the dining area of your restaurant. If this happens, you could risk losing customers or receiving bad reviews.

If your wastewater overflows due to clogging, it could spread into other areas of your kitchen. Contamination of water and other foods are a serious health violation. It affects your employees’ and customers’ health.

Potentially, it could even shut your business or restaurant down.

A lot of the dangers of grease traps listed above can violate health codes.  This could mean a substantial fine.  Health officials may even require that the restaurant is closed until such problems are fixed.

This doesn’t look good for any business and could mean losing employees, customers, and profits.

Out-of-control grease fires cause a lot of damage.  And, repairing a kitchen can cost a pretty penny.

Remember, the best way to ensure that the grease trap in your restaurant is in tip-top shape is to set up regular appointments. Professional grease trap cleanings are quick and affordable. Contact us at Advanced Septic Services, in Clermont, FL at 352-242-6100 to set up routine maintenance for your restaurant’s grease trap.