Does your home use a septic tank instead of a city sewer connection? You will want to know these most common words from our glossary of septic system terms and definitions. 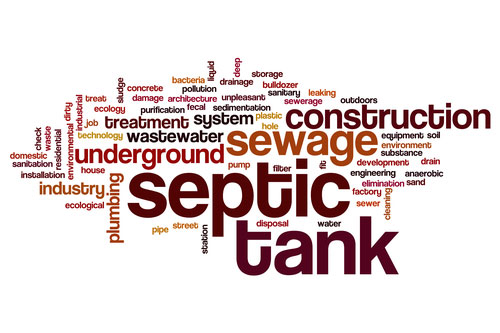 The number of gallons per day per square foot that septic tank effluent flows to the absorption bed or drain field.

Aerobic bacteria is bacteria that only exists in the presence of oxygen. They live in the soil around the drain field and are responsible for removing pathogens and other biologic materials coming from the septic tank.

Anaerobic bacteria exists in the absence of oxygen.  They also live in the soil surrounding the drain field and keep the biomat under control.  Bacteria in septic tanks are necessary to break down waste and anaerobic are well suited to the job.

The biomat is a byproduct of decomposition and contains biological material composed of organic matter, microorganisms, sulfites, and minerals.  It is a critical part of your septic system that processes out pathogens before the effluent returns to the local water table.

Blackwater, or septage, is waste from household toilets, urinals, and kitchen drains.

An opening in the septic tank, or holding tank, that provides ready access for pumping out sludge and scum.

A pipe that conducts septic effluent from a septic tank via gravity, or a pumping chamber, to the absorption bed.

The distribution box, also known as a D-box, distributes liquid effluent that flows from the septic tank to the drain field.

Dosing tanks collect septic tank effluent and periodically distributes that “dose” of effluent to the drain field for soil absorption.  Dosing systems may extend the life of a drain field.

The drain field is a central component of your septic system in which perforated pipes are laid in graveled trenches.  It functions as an absorption bed that collects and processes effluent from your septic tank before it’s returned to the local water table.

The soil acts as a filter for the effluent as it percolates down toward the groundwater.  The soil’s ability to absorb water is critical to the proper functioning of your septic system.  Drain fields are also known as absorption beds, disposal fields, seepage fields, or leach fields.

Drain field failure can occur due to kitchen grease, an overload of organic material, age, lack of maintenance, or sodium in the waste water from cleaning products and dietary salt.  You can extend the life of your Clermont home’s septic system by following these Do Not Flush Rules and scheduling regular septic services.

Effluent is the partially treated liquid wastewater that flows from the septic tank to the drain field.  Large solids have been separated by settling to the bottom of the tank, and light solids and grease have coagulated into a scum layer on the top.

Fats, oil, grease that is a component of wastewater that forms a floating layer of scum in the septic tank.

Gravity fed systems are the most common septic design.  These systems rely on gravity to release effluent from the home to the septic tank and then to the drain field.

Subsurface water in a saturation zone that feeds wells and springs.

Septic holding tank systems have sealed tanks that retain household waste and wastewater.  They have no drains so that waste must be pumped out by a septic pumping company regularly.

Mound systems are another configuration of drain fields in which select drainage soil is mounded on top of the local soil.  The purpose is to add more effluent processing area when the local water table is close to the surface.  Mound systems include a pumping system that pushes effluent through the septic tank into a dosing tank.

Percolation is the ability of the soil in a drain field to allow water to pass through.  A percolation or “perc” test is usually required to select an appropriate site for the drain field installation.  The test is used to determine the amount of time it takes for water to move through the soil which is measured in minutes per inch. This soil test is part of the standard septic permitting procedures for Lake County and other Florida Health Departments.

Retention time is a measure of the amount of time in hours or days that effluent remains in the septic tank before flowing out to the absorption system.

Scum is less dense than water so that lighter solids, greases, soaps, and oils float to the surface of the liquid effluent and form a scum layer.

Waste carried from toilets, urinals, and kitchen drains, which forms sludge and scum layers that are pumped out of the septic tank.

Septic tanks are closed containers that retain household sewage to begin the decomposition process through bacterial action.  Partially processed effluent flows to an absorption bed, or drain field, for further treatment before returning water to the local water table.

The combination of human and household waste with water that is discharged into the plumbing drain system.

Heavier solids settle to the bottom of the septic tank and form a sludge layer.  The sludge and scum layer are removed from the septic tank by periodic pumping services.

Water from the household that is discharged from sinks, showers/tubs, laundry appliances, toilets, etc., into an outgoing drain system.

The water table, also known as groundwater table, is the natural level where the soil is saturated with water.  It typically fluctuates with the seasons as it is affected by the amount of precipitation.