There are many reasons that maintenance on your septic system is a top priority. Routine maintenance means that your septic system will be working correctly, saving you time and money down the road. Both are great things for the homeowner. However, that’s not the reason for Florida septic legislation and laws.

The third reason for regular check-ups on your septic system is to prevent groundwater and environmental contamination. Malfunctioning, broken or improperly installed septic tanks can leak harmful raw sewage into our drinking water sources. If the contaminants make it into a larger body of water, it makes the environment unsafe for wildlife and human use.

Algal blooms and nitrates have been hot topics in recent years when talking about the Florida environment. Many claim that septic systems are to blame. However, why is that? And is that even true? 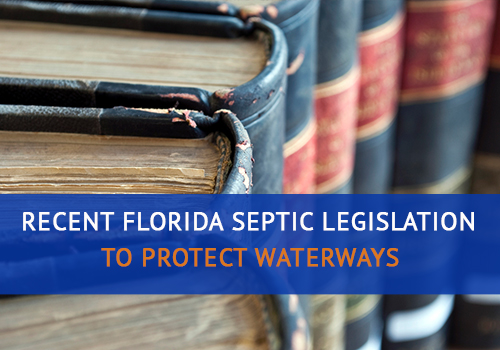 What is an Algal Bloom?

An algal bloom is a rapid growth of microscopic algae in the water.

Seems pretty harmless, but they can cause significant problems for marine life. When the algae increase rapidly, they cover the surface of a body of water, like a lake or bay. When this happens, algal blooms will deplete the ecosystem’s nutrients and can block out the sun to the deeper layers, keeping those organisms from photosynthesizing.

Algal blooms are dangerous. Some, known as the red tide, contain neurotoxins that can lead to shellfish poisoning in humans. Further, algal blooms can severely lower oxygen levels in the water, ultimately killing off fish and other marine life in the area.

What Causes an Algal Boom?

Algal blooms can naturally occur after a storm. As the storm churns the water, larger amounts of nutrients appear at the surface, where the algae and other cyanobacteria live. Since these types of nutrients usually sustain life on the bottom, the algae are triggered to bloom quickly.

Instead of being thrown away or properly removed, these unsafe septic tanks remain buried in the ground, putting the surrounding environment at risk. This can become a problem whenever Florida coastlines see a significant storm, like Hurricane Irma.

In 2012, Florida stopped enforcing a 2010 law that required state-wide septic-tank inspections every five years. This law was designed to limit leakage from septic systems that could harm the Sunshine State’s natural springs. Since then, septic legislation had fallen by the wayside.

Recently, Florida Senator Debbie Mayfield proposed bill SB 1758, which targeted much of the state’s oversight on septic contamination in major waterways. Mayfield asserted that responsibility of septic issues should move to the Department of Environmental Protection, giving it more power and responsibility in the realm of septic problems. In short, the bill pushed to make the repercussions of poor septic maintenance an environmental issue. It would allow for a grant program to monitor and construct water infrastructure initiatives. The bill also sought to make wastewater treatment plants responsible for notifying the public about leaks or discharges of raw or partially treated sewage into the surrounding environment, including waterways.

However, bill SB 1758 never made it out of the House for uncertain reasons. Also, although Mayfield’s proposal did not pass into law, the effort still has opened conversation again about the Florida government taking responsibility for septic environmental issues.

Another bill in 2017, House Bill 285, attempted to make mandated septic inspections part of house buying transactions. It highlighted real estate issues in Florida by proposing that sellers need to tell buyers if the property has a septic system. This will prevent homebuyers from acquiring property they thought was part of the municipal sewer system or who are unaware of a possibly old septic tank on their land. It also pushed to have buyers sign a form that requires them to have their septic system inspected and serviced every 3-5 years. The idea was that the Department of Health would have the ability to build a database of all functional and malfunctioning septic systems in an attempt to crack down on mishaps.

What Can You Do?

Algal blooms and septic contamination are increasingly becoming environmental issues in Florida. As a septic system owner, your desire to keep a maintained system goes beyond money and time.

You can do your part by properly maintaining your septic system and staying educated. Contact your trusted septic professionals to ensure that you’re doing your part to protect Florida’s natural landscape and wildlife.